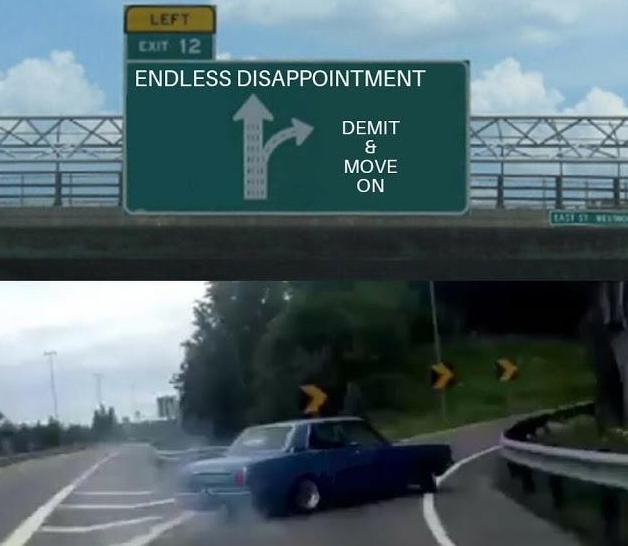 When the Meme Hits Home

*Note - There are Freemasons who enjoy both the spiritual side and the fraternal side of the craft. In this piece I address the hard liners. The "Esotericists" who don't attend lodge for a lack of proper education, and the "Standard Brothers" who get up and walk out of an educational lecture. I am pointing out a division that exists within two factions but advocate for the esotericist to follow their path, even if that means coming to grips with the statement, "Freemasonry will not support my expectations of a mystery school." Still interested? read on.

In response to a meme that I found on The Winding Stairs [Freemasonry group on Facebook] just 24 hours ago, admittedly I came to the conversation late. When I found it it was already 45 comments deep and I decided to comment. I Said, "This is a great meme. Felt this way for a looong time. So I became a hermit. Started a new lodge and rededicated myself to outside esoteric schools. It’s what you gotta do sometimes. ¯\_(ツ)_/¯ "

I should admit, you will find me at many lodge meetings. I'm not really a hermit. I digress. After continuing to read the comments I came to a sudden revelation. Maybe not so shocking, maybe not so deep... but true to me at least. That truth is that many people come to "Regular" Freemasonry, in the hopes of finding a modern-day mystery school. However unless this is a Lodge that is enjoying a deep esoteric, spiritual experience as an established part of their identity, he won’t find it.

On the other side of the coin, there are those members (the majority) who are deeply satisfied for having joined something where they find not,spirituality, but rather fellowship camaraderie and something to do that is a little more social. I hesitate to say a social club. It's true for socialite and esoteric seekers alike. A socialite mason isn't going to find a great business networking opportunity within a lodge of Kabbalists, and a practitioner of say, Enochian magick isn't going to find value in running a fish fry.

Arguably Freemasonry is a spiritual and intellectual course of discipline. However the craft has evolved into something wholly different through time. Whether this is wrong or right, who can say? I cannot say that the "social club" Masonry is "doing it wrong", because it is exactly the way it is supposed to be, according to how it is being promulgated by our institutions at large. How different is it from the context of the ritual? It's as if the word "Speculative" has taken the full reigns.

Some would say Freemasonry isn’t very Masonic [anymore]. I would tend to agree with this, if only for the fact that we've redefined what Freemasonry means. Which is why we have the relatively new Traditional Observant Lodges, and others. A sort of push back, if you will. Freemasonry is healthy. I don’t think it’s going to go anywhere. But also it is “changing with the times." Regardless of the foundation or tradition, it is changing to be more accepting, and to embrace wholeheartedly the more tangible things that the Craft seems to represent.

When we say the, "...greatest of all these is Charity.", our organizations are latching on with everything, and going all in like Maverick at a poker game. There are those “esoteric Freemasons" who are fighting what we consider, a war to get Freemasonry back to what it was, or rather what it’s intended purpose was. I’m afraid, outside of the Traditional Observant movement, Educational focused Lodges, the more spiritual experience based Lodges, will always be the minority. They are doomed to suffer under the administration of an organization that promotes something completely different than what they are and represent.

This makes it difficult to even operate within the confines of the system. So we’re left wondering about the definition of Freemasonry and how that definition has changed with time. We all come to this conclusion that it is okay that it’s not embodying what its original purpose purports to have been (Education).

The key is balance? Maybe. It doesn't work with hard liners. Consider the facts. This works for middle ground Masons who find themselves intrigued with the esoteric. But the practitioner of the Royal Arts rarely has any interest in anything of pomp and circumstance, honorifics, charity events, lunch and learns, retirement options etc. And I will say that the opposite is true for our brothers on the other side. I would hardly expect such a Freemason to sit through a 90 minute discourse on the Golden Versus of Pythagoras. Or to sit through a 45 minute Yale Lecture on biblical foundations with an extensive Q&A afterwards. These are two separate organizations. Dare I say, the esoteric version just doesn't fit Freemasonry any longer. Maybe it hasn't for a really long time...

When we look at the records we see the Masonic scholars throughout time have complained about Education in practical means. In fact the SRIA and SRICF were born out of Masonic needs to get deeper into the mystical, and yet it was not practical enough. So out of this was born the Hermetic Order of the Golden Dawn, which later became the Alpha et Omega in the USA. And even this organization further split. Theosophy was no different, one organization with a firm foundation, later split into others due to differing approaches in teaching the work.

Truly there is a home for the esoteric Freemason like myself, but our Lodges number in the tens. It is difficult to find a lodge where we fit. "Traditional Masonry" is not an esoteric experience. It is the experience of the social and charitable Lodges where the majority of Brothers find themselves once or twice a month. The Meme in question (above) - I don’t blame the man making it. In fact the meme spoke to me. We hear the words ad nauseum - "Be the change." Really, I think we need to get real. Freemasonry is not where I would recommend anyone go for an Esoteric Experience, not until it's the norm. Modernity has changed what Freemasonry is, the majority has latched on and it's not really right for any esotericist to try and change that. While I'm on the topic of dank memes...As much as I love this golden meme below, well...I just keep quiet...mostly.

When I sent this article to a Brother, he alluded to Freemasonry being a beginners guide, an introduction or a menu of different divergent paths which lead to some esoteric places. Maybe he's right. I think there may be something to that.

I say let Freemasonry flourish in the way it is being lead. Celebrate our Brothers and their accomplishments. If we can't do this, then maybe we shouldn't be there anymore.

The Art of Masonic Education